Showing posts from February, 2008
Show all 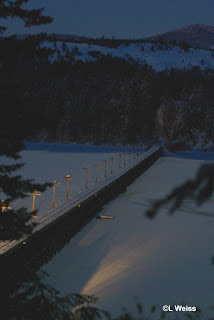 Perhaps even before the mid-seventies wore into the late seventies it was obvious that things along America's final transcontinental railroad were headed in such a backwards direction that salvation might be near impossible. Not because salvation was an impossibility, but because no one with the ability to change things for the better was allowed to. The final years of the Milwaukee are wrapped in the sort of corporate mystery and intrigue that add layers to its story and depth to its misery. Out along the line in this period, the scheduled trains disappeared as schedules became increasingly difficult to maintain. Thunderhawks and XL Specials were gone, replaced during the renumbering program of the mid seventies. Then gone completely as traffic began to dry up along the transcontinental line and across the decayed eastern half of the Milwaukee empire. The final days of the Milwaukee Road saw Dead Freights rule the high iron. Traditionally the Dead Freights had been made up
2 comments
Read more
More posts