Showing posts from September, 2006
Show all

In the High Desert 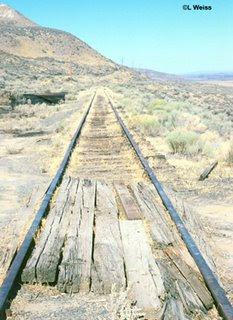 On the high desert of Central Washington one of the last remaining stretches of Milwaukee Road mainline still runs toward the Cascade Mountains and the West Coast just as it did when laid in 1910. The 1970s images of Dead Freights in frigid cold and blowing snow roll through my mind as I stand at an old place named Corfu. Those were images captured during the last winter the Milwaukee operated here, and by all reports it was a brutal winter. Today, though, it's a brutal sun that bakes the desert country and the steel lines that still ply the landscape. Images and stories in books tell of a time when Corfu had a passenger station and was the sight of great jack-rabbit hunts. Passenger trains pulled by Bi-Polar electric engines rolled through here in the orange, red, and black colors of their owner and the nation marveled at "America's Resourceful Railroad." Then the long decline, the management mis-steps, the bankruptcy, and the brutal winter of 1979. This piece
3 comments
Read more
More posts