Showing posts from October, 2006
Show all

What was Left Behind 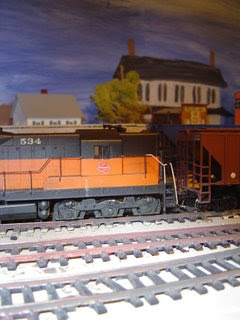 One of the fascinating things that the Milwaukee Road did was leave behind a loyal following of people. These people look very different from one another, live in places thousands of miles apart, have jobs that span the worldwide market, and lives that run the gauntlet from the young 'uns to the retired folk. I've written before on this effect, referring to it as the "and The Milwaukee Road" effect. It's the call that sends people traveling to a collapsing passenger station at Martinsdale or wading through tall grasses near a place called Pandora. There's a tug at the heart to go there, to experience what's left, to feel time and God's hand at work. Some of us take it even a step further. Not content to simply look at old photos or travel the abandoned trails of the Hiawathas, we rebuild what was. In the photo to the left, it's a late summer day in September 1979 and 534 switches grain at Three Forks, MT. It's just a small piece of what
Post a Comment
Read more
More posts