Showing posts from July, 2007
Show all

Silver on the Journey 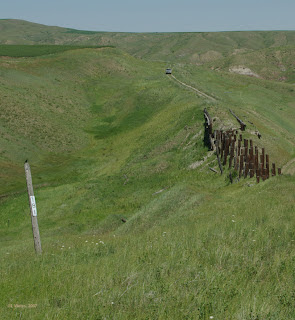 181 Miles from Lewistown, out among the rattle snakes of the hot Montana Plains, on the abandoned portion of the Milwaukee's "Northern Montana Lines" sits an old milepost, a dismantled trestle, and more of the remains of America's last transcontinental. The green grasses and wheat fields of the Red Coulee area belie the heat on this June day, but my full-length snake boots that are tied tight against my legs constantly remind me that it is just plane hot. The journey to Red Coulee has been an interesting one. In fact, the journey along the abandoned corridors of the Milwaukee these past several years has been loaded with amazing and deep experiences. My partners on the journey have been few, but consistent. As a wind begins to blow across the coulee and a red wing black bird chatters from atop the old telegraphy pole, the cold chills I feel remind me of one of my traveling partners - the one who put this old railroad on my heart to begin with. The One. From an
Post a Comment
Read more

The Way it all Would Go 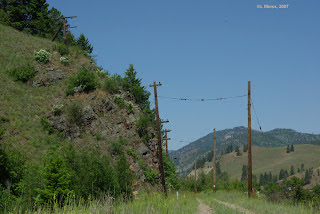 How could it all just be gone? How is it possible that something so big would simply disappear into the shadows of history? I've traveled and photographed almost every part of the Western Extension, and the thing that hits me most is the scale of what they did and then, 70 years later, what they undid. From Terry, MT in the east, to Seattle and Tacoma in the west. It is all just gone. I've shared a lot of stories and photos now that this blog is about two years old. I've reminisced about the rolling wheat fields of the Palouse, the huge trestles of the Bitterroots, the silence of a day spent in Harlowton, even the lonesome winds that blow across the Northern Montana Lines. But every once in awhile, the scale of this beast just gets to me. The hundreds and hundreds of miles that are marked by little more than a gravel path, or an old telephone pole are haunting. To come across an old milepost still fixed to a lineside pole and actually think that milepost 1899 mea
Post a Comment
Read more
More posts