Showing posts from September, 2005
Show all 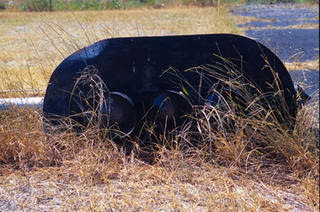 I guess somebody once looked at The Milwaukee's Pacific Extension and thought it looked more like a branch line than a real transcontinental route. I suppose that's understandable since for many of its later years weeds and derailments seemed to define the old line. What is remarkable is that the railroad functioned at all in its final years as money and locomotives were pulled away from the Western Extension to be used elsewhere on the sinking system. Because the route's path to the West Coast avoided many of the population centers that exist in Montana and Washington, The Milwaukee set up shop in small towns from where it ran much of its business. Othello, WA was a Milwaukee sponsored railroad town that was a center of activity when trains switched out electric locomotives as they traveled east or put them back on the point as they moved west to Seattle. Similarly, Avery, ID was a mountain railroading town buried deep in the valleys of The Bitterroot Mountains whose onl
Post a Comment
Read more 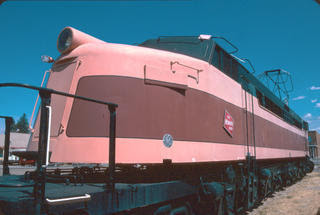 When it came to mining, canaries were often thought of as barometers of safety, keeling over dead because of bad air in the mining shafts before any of the miners succumbed. To an extent, one can say the same of the 12 Little Joe electric locomotives that were owned and operated by The Milwaukee from the early 1950s to the termination of Rocky Mountain electrification in 1974. Originally manufactured by GE as exports to Russia but landlocked in the US after the State Department annulled the contract due to rising Cold War tensions, The Milwaukee ended up with 12 of them after a fair amount of haggling, feet-dragging, and modifications to the original design. These modifications included a re-gauging to standard American gauge, a re-ballasting to improve tractive effort, and a boost in the over-head catenary wire's operating voltage from 3000 volts DC to 3500 to accommodate the 5000hp output of these new units. With these modifications in place, the locomotives were turned loose o
Post a Comment
Read more 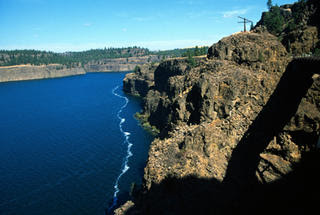 It doesn't take much research of The Milwaukee to come across the interesting electrical "gap" that existed between Avery, ID (the western terminus of the Rocky Mountain Division) and Othello, WA on the Coast Division. The gap in The Milwaukee's western electrification existed for various reasons and was the stomping ground for many of the Milwaukee's large S3 4-8-4 Northerns that hauled tonnage between the electrified portions of the line. The line between Othello and Avery was and is still a very isolated section of the Western Extension that proves just as difficult to track today as it was thirty years ago when orange and black locomotives still roamed the line. In the center of this isolation lies Rock Lake. A deep and beautiful lake that remains undisturbed and much as it was before a young America's push for the west started in the 1800s. To walk the abandoned rail line along the lake puts you in the company of only a few deer and large hawks that inh
2 comments
Read more

The Current State of Affairs

September 06, 2005
In the late winter of 1977 (December 19 to be exact), the last transcontinental railroad that was built in America filed for Chapter 11 Bankruptcy protection. Its lines across the mid-west and west lay in ruins as a result of a complicated and inter-twined series of events that, at best, are difficult to understand. The winter of 1979 would be its final winter and in 1980 The Milwaukee Road sold its Western Extension to scrapers from Terry, MT to Tacoma, WA. The company that emerged (with track only in the Midwest) would last only five more years before being sold to The Soo Line, thus completely ending the granger railroad that never really came to grips with being a large transcontinental route. As a matter of fact, the 1970s weren't a happy time for railroads in general. At least up until the Enron fiasco, the record for most money lost in a single day by a corporation was held by the Penn-Central Railroad. The Rock Island Railroad would, like the Milwaukee, file for bankruptcy
Post a Comment
Read more
More posts