Showing posts from June, 2006
Show all

Through the Sweet Grass As I-90 winds its way down the east side of Lookout Pass a cut in the trees becomes visible high up on the sides of the lush Bitterroot Mountains. It's not much of a clearing, but it is marked by the continuous presence of seemingly out of place high-tension power lines. Winding further east and down-grade, the cut in the trees gets closer to the road and at a small town called Saltese, an enormous black trestle spans the Silver Creek valley and the houses that have been built up around its large pilings. For east bound travelers, they have met The Milwaukee Road and it will travel with them to Butte as they blast eastward on the modern four lane supher-highway, I90. On a day back in July of 2005 I sped east past the silent bridge at Saltese and toward Missoula and Butte. I marveled at the old substation at Ravena, a remnant of Milwaukee's much publicized electrification of the late teens, but continued to push east. The miles were adding up and I arrived in Butte in the ea
Post a Comment
Read more

The High and the Mighty 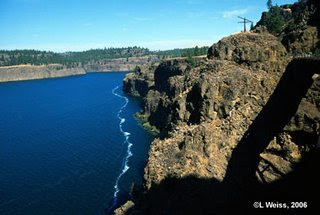 June 15, 1974. A Little Joe lowered its pantograph for the final time and the Rocky Mountain division was de-energized forever. For weeks the day had loomed; a derailment at East Portal on St. Paul Pass had removed several feet of catenary, but knowing the end was near no fix was authorized. The final days saw electric locomotives lowering their pantographs across the broken section, then raising them on the other side. Now, on June 15, no more electricity would flow through traction motors anywhere on Lines West. So here we are, 32 years beyond electrification and 26 years beyond Lines West. More than a quarter century has passed between us, and the hands of time have left places like Rock Lake, shown above, quiet and alone as before all of this happened. From high-iron and named freight trains to a gravelled rise in the ground, running a shockingly long distance from eastern Montana to the Pacific Coast. Aboard an airline flight on the evening of Memorial Day 2006 I looked do
Post a Comment
Read more
More posts