Showing posts from February, 2006
Show all 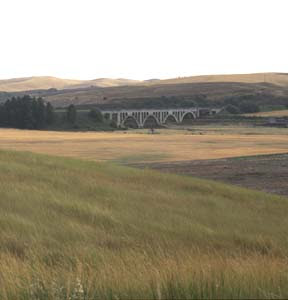 The first day I visited Pullman, WA in late January of 2002, I found Rosalia half way between Spokane and Pullman on US-195. Laid out across the small valley were the concrete arch bridges that carried the Milwaukee's Western Extension not just over the small creek and Steptoe Battlefield, but over the old Great Northern (Spokane and Inland Empire) and Northern Pacific as well. The Extension was constructed in record time with a record price tag and the bridges at Rosalia still reflect that high degree of engineering and building. With its conquest of The Bitterroot Mountains behind it, The Milwaukee set out across the rolling landscape of Palouse country, through small towns like Tekoa where the skyline is still dominated by an enormous black trestle spanning the valley there, beyond Pandora, where views of Steptoe Butte can be seen around the high hills of grain country. Through Rosalia and Malden, Pine City, Rock Lake, and out into the Washington Scab Lands. In central Wa
2 comments
Read more

February 13, 2006
In the waning hours of a hot July day, I parked the truck next to I90 on a small fisherman's access to the Clark Fork River. Drexel, was the name listed on the exit sign and after quieting the large Suburban and letting it rest in the shade, I wandered down the short distance to the bank of the River. I had arrived at my destination, but saw nothing except forrest and some power lines that were still strung through the area, paralleling I90 just a short distance away. 25 years ago, on the other side of the small river America's final transcontinental railroad packed up its bags and went back to the Midwest, where it had come from 70 years before. It had left behind it a thousand miles of towns, people, and history that now appeared to be overgrown in the Montana woods that surrounded me. I could feel the history as the sounds of the rushing water filled the air and I knelt down and prayed. I thanked God for bringing me to this place, seeing me through nights with little sleep,
Post a Comment
Read more
More posts